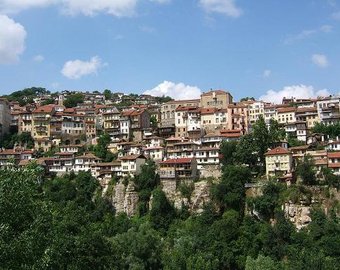 Veliko Tarnovo is a city located in the centre of Bulgaria, on the halfway between Sofia and Varna. South of the town rise the cold northern slopes of the Balkan Mountains and north of the city extends the vast Danube Plain.

Veliko Tarnovo is a city of many sights and one of the most popular tourist centres in Bulgaria. Its unique location on the three hills Tsarevets, Trapezitsa and Sveta Gora, makes the town one of the most beautiful in Bulgaria and also adds special charm to the city’s appearance and its own identity. A walk through this ancient city can leave anyone who stepped once on the narrow cobblestone streets speechless.

The old houses mixed with modern buildings look as if they are perched on one other and each of them is a unique monument of architecture. Veliko Tarnovo is one of the few places where nature and all build by men complement each other to create an unexpected harmony.

All monuments preserved in Veliko Tarnovo has kept the spirit of all ages and periods of Bulgarian history – from Ancient times to present days. The first traces of human presence in the region dated from VI century BC.A Thracian village was found on Tsarevets dated back from the 3rd millennium B.O.T.

Throughout the Middle Ages, Tsarevgard Tarnov was the pearl in Bulgarian tsars’ crown.After Bulgarians declared their liberation from Byzantine rule in 1185, Tarnovo became the capital city of the Second Bulgarian Kingdom and remained the capital of Bulgaria until the invasion of the Ottomans in Europe.

On 7 July 1877, Russian troops liberated Veliko Tarnovo. On 10 February 1879 here in the old Ottoman municipal building, was held the fateful Constituent assembly. The Tarnovo Constitution was accepted then and it was one of the most democratic European constitutions back then. This historic act laid the foundations of the new Bulgarian state.

Today Veliko Tarnovo is a modern European city, that is not only an administrative centre, but also a cultural one and a tourist destination.